Two days ago I screeched to a halt, made a U-turn and went back to investigate a few spots of soft orange along the national road which I had never noticed before. When I went back to photograph them early this morning it was still Wednesday somewhere in the world; important – as this is my contribution to Wildflower Wednesday, driven by the indomitable Gailforce…

I am pretty certain that what I found was a colony of Crossandra zuluensis, which I think ( but have not checked) I have seen flowering quite freely in the Haenertsburg Grasslands (about which, as I said in my previous post, I will still write extensively…) during spring. I don’t know them in late summer, but their flowering time is given as Sep-Mar. A goodly season, especially for such a beaute. It will find its way into my garden and my meadow.

As happens so often when you find a particularly lovely wild flower, there were several other interesting species in its vicinity. I searched around for a reason, found none. Unless perhaps this patch of ground had been disturbed in the not too terribly distant past – but why? This little pea flower (well, its not so little – over 3cm 1 inch across) always reminds me of a snail. Not just because of its spiralled shape, but because the individual flowers seem to lie just above the ground, seemingly attached to nothing in particular. It is, I suspect, Vigna unguiculata, the Wild Cow Pea, which I often find in the wild parts of my own garden. I rather like the combination of violet and orange. Do I have the energy to stage-manage such effortless spontaneity? 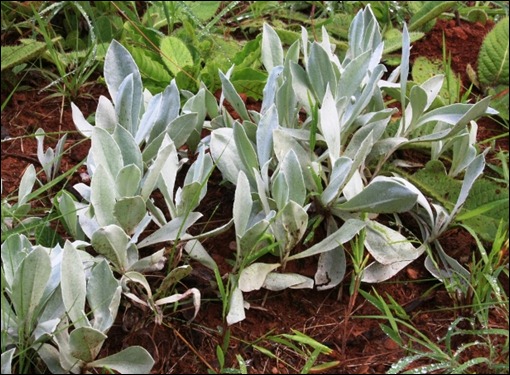 Then there were these fresh silver leaves, almost certainly belonging to one of the hundreds of helichrysums – our main provider of all shades of silver and grey on the mountain flora. They were particularly beautiful and I shall be watching them. And to round things off, unfortunately sleeping demurely in the still misty light of early morning, there was a whole group of starry yellow Hypoxis…

At last! Months later, I get to take up Jean’s invitation to post on my visits to Sissinghurst. Last month I at least laid the foundation when I posted on Long Barn, the Nicholson’s previous garden.

Recently I started scanning the nearly 1500 slides I took during the trip, and in time I will post on other gardens I visited. The above view of the Rose Garden from the top of the tower I photostitched – a fun exercise! The hedge on the left between the Rose and Cottage Gardens has been rejuvenated over the last few years. Compare current photos of its new slim and trim shape with this one.

But before I set off, let me point you towards an excellent  impression of Sissinghurst, posted by my good friend Moosey of mooseyscountrygarden.com recently after visiting Sissinghurst for the first time. In her inimitable way she comments on the experience here. And as a collection of Sissinghurst pictures, nothing beats Dave Parker’s series, now several years old, over here.

The Moat Walk is flanked by the oldest brickwork at Sissinghurst, part of the foundation of the medieval manor, and unearthed (literally) to much excitement from the overgrown rubble towards the end of 1930. My source, by the way, is Tony Lord’s excellent book Gardening at Sissinghurst, together with Jane Brown’s Vita’s other world . There are few other gardens (or relationships!) as well documented, which helps to explain the immense interest in Sissinghurst. I own and have read and reread these books, as well as several others on the garden, Portrait of a Marriage, and the many volumes of journals and the letters between Vita and Harold and other people. You might call it my obsession 😉

This picture captures many of the elements of the garden: beautiful lead vases – bought one by one as they could afford them from a patient antique dealer– top the Moat Walk’s ancient wall, which is colonised by various lime-loving crevice-dwellers, seemingly without human intervention. In fact the effect is carefully orchestrated, and whereas some of the plants are almost weedy, others are rare and select. 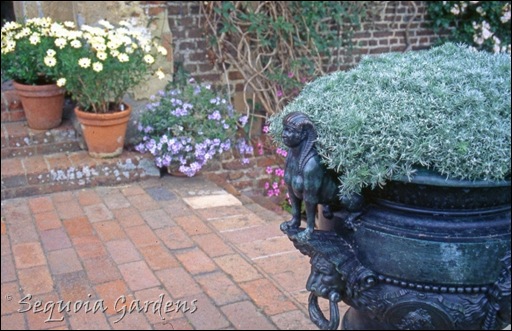 On the right is one of the Bagatelle vases, inherited by Vita’s mother, Lady Sackville… and thereby, too, hangs a tale… Here it is planted with what I assume is a Helichrysum , but not  the plant Tony Lord shows it with.

We are now in the Rose Garden, where another of the qualities that define Sissinghurst and have been copied in so many ways during the last 80 years can be seen: the lush and luxurious planting within a strong geometric structure. Although roses are the central plants in this garden, a vast variety of other plants provide texture, colour support and an extended season of interest, all contained within a network of paths and hedges of various heights. The central Rondel (see first photo) masks the fact that two important axes do not cross at right angles, due to the obtuse layout of the original buildings. The Rondel in turn is central to my own development as a garden… but that is a subject for a separate post!

Here is another view across the Rose Garden… the flag irises at Sissinghurst make me despair for my own garden, where they need to be cosseted – and yet I’ve grown them with huge success in previous gardens… The Lime Walk which runs parallel to the Rose Garden can be seen in the background – note the series of horizontal lines that help give form to the composition in this garden.

The weakness of the last two shots is that they make the Cottage Garden and the Rose Garden look very similar in feel, which they are not – you will need to explore that statement by studying other people’s photographs!

Admittedly less impressive than this hybrid, it nevertheless was an impressive sight which I had never noticed before. Strangely enough, despite all my plans, I’ve never brought any of it into my formal gardens, and a friend who imports new varieties of plants and trials them for commercial sales, has told me that all the phygelius he tried have disappointed him…

And thus we come to the end of my highly personal impressions of Sissinghurst.

I said in my last post that I would have to do a follow-up on this plant! Crocosmia aurea,  flowers slightly later than C. paniculata and does well in both heavy shade and full sun; above they grow in full sun amongst flag irises and the  photo below was taken with flash in heavy shade. 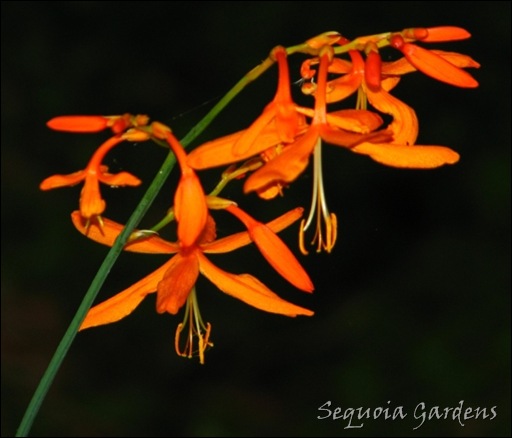 One of many different Helichrysums (everlastings) that grow for us, I associate the tall, elegant, ghostly outline of H. mundtii with arriving on the farm at night from Johannesburg, and thinking as they loom up in the headlights that late summer has arrived. 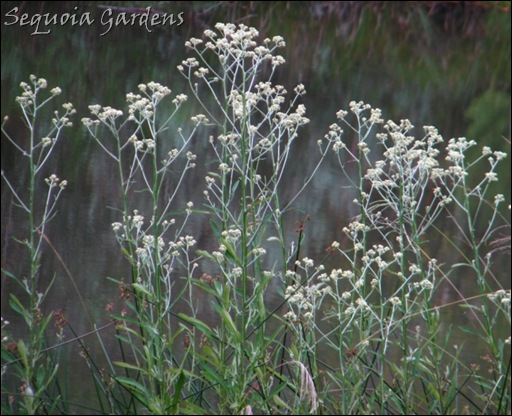 They really are colourless, their grey felty texture against the neutral backdrop of the water – a position they chose themselves – being by far the most effective way to view them. 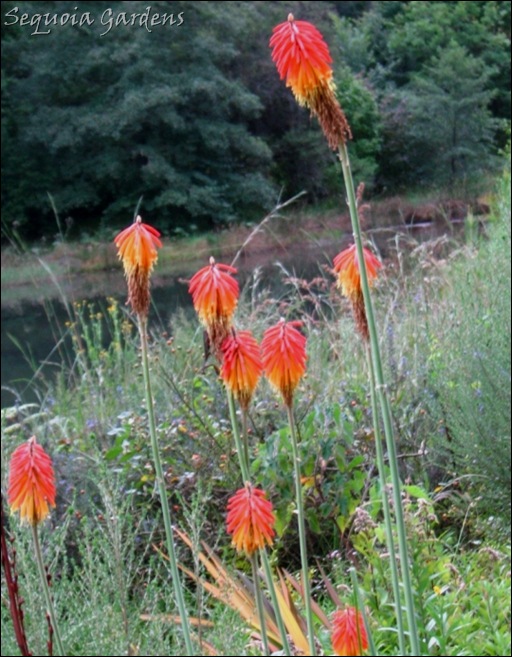 Another waterside plant is Kniphofia triangularis. This plant was moved from across the stream which feeds the dam into the Cottage Garden. It is slighter and more herbaceous than the typical South African choice, K. uvaria.

Possibly our most noticeable wild flower, Hypericum revolutum can grow into a leggy, woody shrub of over 3m, but is easy to keep to proportions that work better in the garden. It flowers on and off for many months.

We’ll ask the ferns to modulate to a quieter theme. I have never got to grips with identifying the various ferns. There are thousands, and everything seems to happen in intermediates. Here they grow on a shady bank, a meter high road cutting. 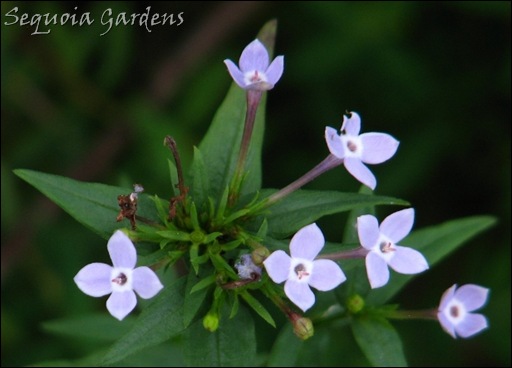 Conostomium natalense is one of those wild plants that don’t quite make it into the garden; the flowers are just a little too small (about 5mm or 1/5in across), borne erratically, and the plant too insubstantial to make a statement. However one constantly notices it during its long flowering season in the wild parts of the garden, where it enjoys growing on the edge of paths up against grasses and other plants. 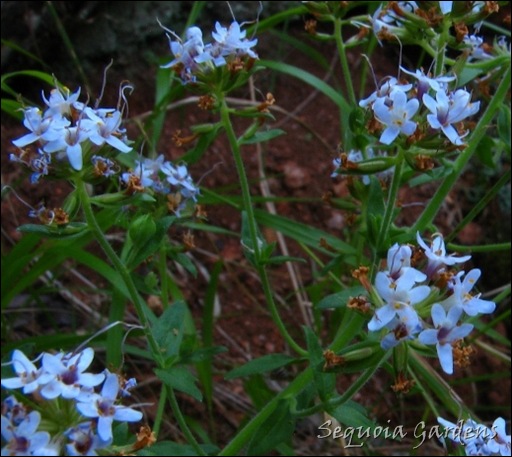 Smaller still is this flower, each perhaps 3mm across and borne in panicles which are quite dense around the new year, but by now are spaced out. It is one of those delightful plants which once noticed are worth taking a close look at. I think it is a Pentanisia species – but don’t quote me! 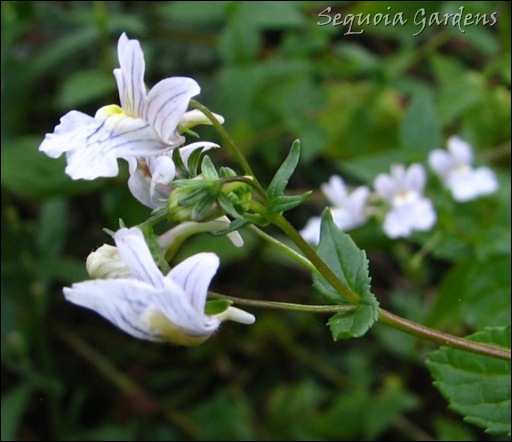 Growing close by is an even better example of a little flower I only really came to appreciate once I had photographed it in macro. It is, I am pretty certain, Nemesia albiflora and the flowers are so tiny that unless you stoop to study them, the blue veining is quite invisible. 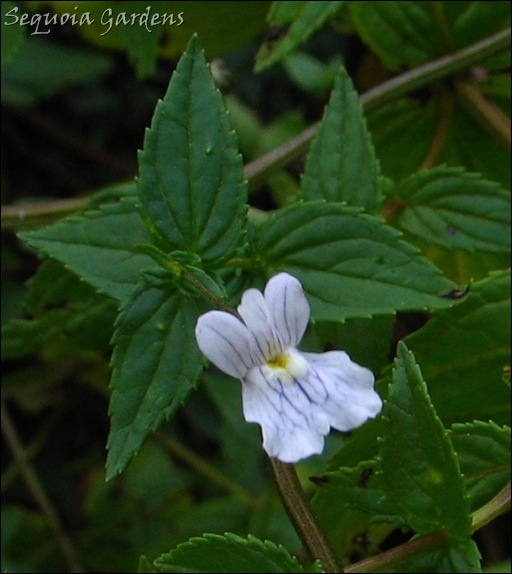 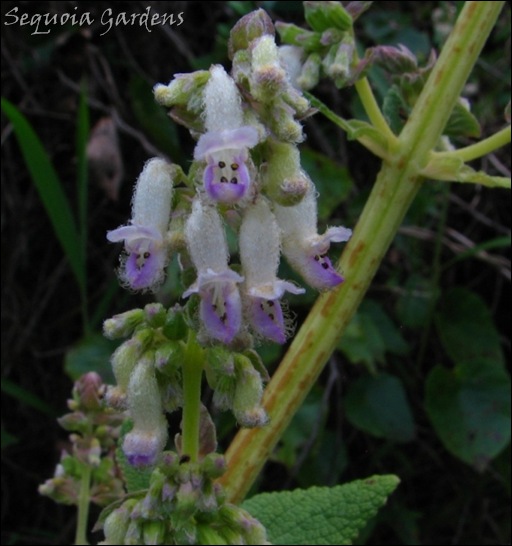 I have yet to do justice with my camera to Rabdosia calycina. Of the mint family, the flowers are barely 1mm across, covered in minute hairs and with a bubbly texture as though one is aware of each cell that forms the flower. It is the ultimate look-closer flower! 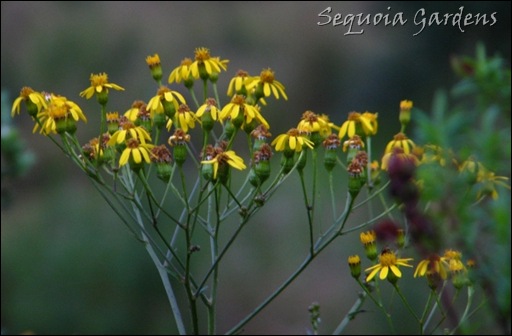 There are many Senecias that flower from late summer through winter – some are substantial creepers, others are weedy herbs. This one, S. decurrens, always looks lovely against the water of the dam below the stone cottage – also known as The House that Jack Built. 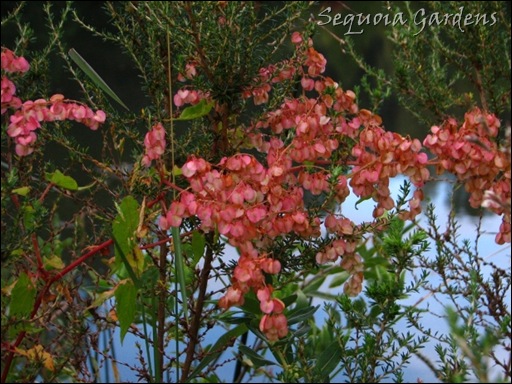 Rumex sagittatus or creeping sorrel is another harbinger of autumn. It drapes itself across other plants, usually elegantly but sometimes thuggishly, and its chartreuse flowers quickly fade to papery reddish clusters that look more like seeds than flowers. 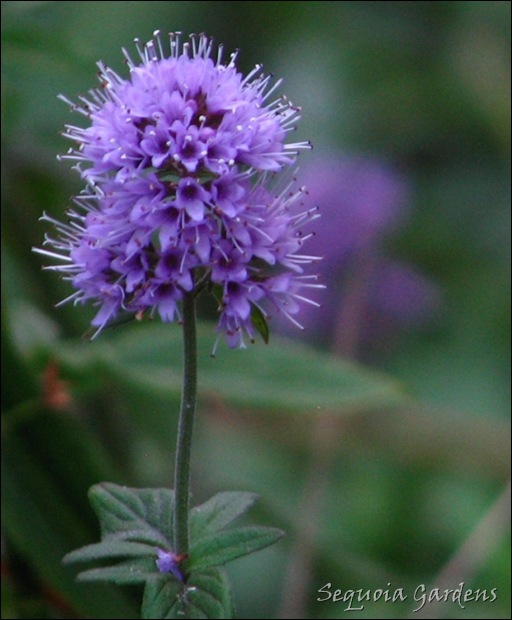 I’ve kept this for last, in the hope that inspiration will strike. I’ve searched through all my books, some twice. I thought I knew this flower, was surprised in fact that it didn’t feature in each of them. But nada. Its clusters of powder blue flowers are about 20mm or nearly an inch across, and it likes to thread through other plants near water, so that the flower panicles are spaced wide enough apart for the whole plant to make for a rather featureless photo. I suspect it is of the mint family, but will have to fetch a peace for closer scrutiny. I did not think, photographing it on Sunday afternoon, that identification might be a problem. Any ideas?

Later: “suspect it is of the mint family“… Well if only I’d picked a sprig then to examine… it is the source of the ubiquitous mint smell which you so often get having brushed through the undergrowth. I tasted it – like spearmint. I came back to my books and looked up Mentha… It is M.aquatica, flowering only in Feb-March, but a constant presence. How come I’d never made the connection? And then of course there is that marvellous source of confirmation -a Google Image search… so Mentha.aquatica it is! 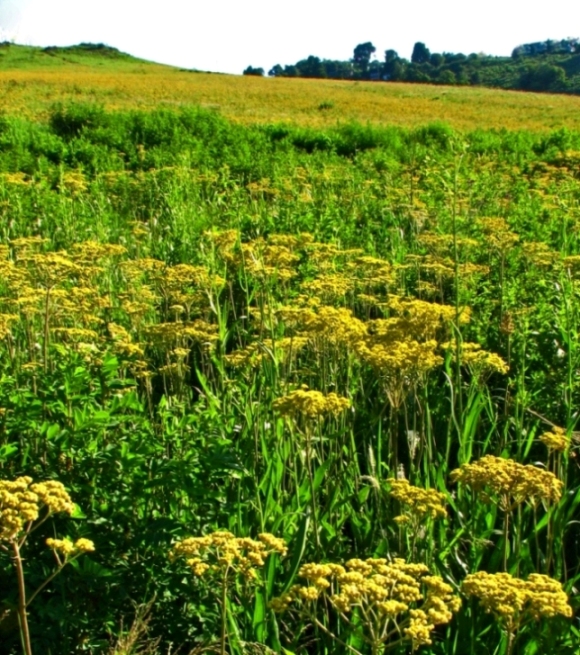 The festive season is rather different in the southern hemisphere; instead of fields of snow we have fields of gold! The heliochrysums (helio = sun,  chrysum = gold) are spectacular this year and nowhere more so than on the Haenertsburg Common, the grassland that surrounds our village.  My weekly pic features them in my meadow, but here they stretch as far as the eye can see. Ironically for something so common, it is difficult to identify positively, and my sources are definitely contradictory, but I think it is Helichrysum pallidum. You can read more about our village and its unique Common and its ecology here.

Anyway, rather than the conventional Christmas imagery, I choose this heart-warming view to share with you and to wish you all the best for the season;  may it be a time of refreshment for the spirit.