As I write this, the house is ready for the arrival of Louis: cupboards cleared, and space for his furniture. By the time I publish it, he will be here. Strange then that the Rondel Garden, tribute to and resting place of Francois, should feature so strongly at this moment. But then; in preparing for Louis’ arrival, I came across a photo album of the official unveiling of the Rondel Garden, when several of Francois’s friends attended, and Louis is there – as my partner. It was October 1996, 33  months after Francois’s  death. Louis knew Francois – quite well in fact, which made it easier to be successor to that larger than life personality. Sometime  in late 1995 I was laying out a garden for someone. He ‘introduced’ me to his neighbour – Louis, with whom I had lost contact, but knew had moved. The rest is history. (And history, and history – but we will not go into that here.) 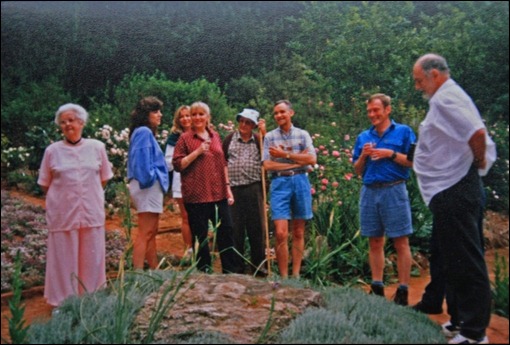 Since there is a lot of nostalgia about these posts, here then are photos from that time; the top photo looks across the rock under which Francois’s ashes are buried; the photo above shows us all drinking a toast to Francois – and below is a unique photo, most likely the only ever taken, of the three of us together 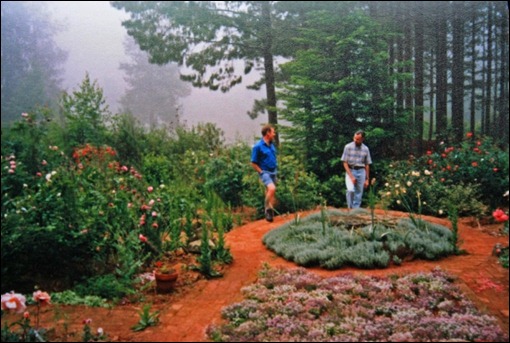 The grey-haired lady in pink on the left of the second photo is Aunty May. She came up from Grahamstown for the unveiling, and for many years we holidayed with her at her house at the coast. From her Grahamstown garden comes the Aunty May Rose – one I have been trying to identify ever since (see the details of my attempts here) – but without success. Here it is again, photographed this spring. Can anyone help?

Interestingly, I have a very similar unidentified rose – the Aunty Corrie Rose, this time from a biological aunt, and it comes from her garden only a few kilometres from Sequoia. Here it is, flowering in the New Old Rose Garden: sumptuous and scented, two glorious roses, and each with a very special story attached!